Indianapolis lawyer, Charles B. Blackwelder, age 70, was recently suspended from the practice of law following being held guilty of four felony counts of securities fraud.

Blackwelder and his daughter Cara Grumme sold $10.4 million of undivided real estate interests to over 300 elderly citizens.   The investments were marketed as being designed to shield their assets from consideration in determining their eligibility for Medicaid.

Elderly citizens often incorrect believe that, to qualify for Medicaid or nursing home benefits, they should move assets out of their own name and into the names of their children or loved ones. However, the regulations are complicated, and there can be serious problems inherent in such an asset transfer strategy.   For example, regulations governing Medicaid eligibility provides for a “look back” period of 36 months, or in the case of transfers to a trust 60 months.

Citizens with some knowledge of the “look back” rules often consult a trusted attorney, CPA or estate planner.  Mr. Blackwelder, a long-established attorney, and his daughter marketed their real estate investments as a means to legally shield their elderly client’s assets from consideration in determining their Medicaid eligibility.

According to court records, CFS sold $10.4 million in ownership interests in rental properties to 300 investors designed to avoid the Medicaid step down requirements.  That real estate portfolio contained 35 commercial and residential properties valued at $7.1 million.

Some of the properties had received foreclosure notices.  The building in West Clay that houses CFS’s office, according to published sources, had lost several major tenants preventing it from having sufficient cash to pay its mortgage payments and investors.  According to the Secretary of State, “Neither Blackwelder nor Grumme informed investors that their properties had been sold prior to their purchase or the foreclosures had already been filed on several properties.  Additionally, Blackwelder and Grumme were using several of the properties for their own personal use.”

The Indiana Secretary of State determined that CFS’s real estate interests were in fact securities.  Former Securities Commissioner Maddox, not involved in the case, agreed.  The Secretary of State deemed some the sales a Ponzi scheme designed to fund prior obligations.

Social Security benefits can be diverted by identity thieves. 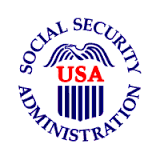 Identity thieves can obtain personal information about Social Security recipients and use that information to open a "my Social Security" account on the Social Security website.  Then they can use that account to redirect the cash benefits to an account they control.  The individual – usually a Senior --  may not be able to prove his/her identity and correct the situation.

Seniors are especially vulnerable to this fraudulent scheme.  I encourage my friends to go to the Social Security website and open a “My Social Security” account.  When you do this, no one will be able to change your personal Social Security information on the internet.

Even if you are not receiving Social Security benefits, you should consider establishing a "My Social Security" account.  An identity thief may use this technique to steal your identity.  If they control your social security account, try proving you are who you say you are.

Here is the website link: https://secure.ssa.gov/RIL/SiView.do
Posted by Greg Wright at 3:03 PM No comments:

Veros Dental didn’t show up at the 2015 Indiana Dental Conference held this week in French Lick.

They had purchased a booth and were included in the list of Exhibitors and Sponsors but were not officially represented at the convention.  This is their first absence from this annual dental conference in several years.  They missed an opportunity to tell their story to an industry that is very interesting in hearing their side and their future plans.
Dental industry conventions are an opportunity to bring dentists together to exchange ideas and for them to meet consultants and suppliers in one place.  Vendors have the opportunity to rub elbows with dentists without having to contend with gatekeepers.  This year, Versos Dental was a no show.

Customers and industry representatives wanted an opportunity to speak with Veros Dental.  Customers wanted to know about their accounting services and investments.  What’s left?  What about the SEC freeze? Could they move their pensions?

You may recall that, on April 24, 2015, two Veros investment advisers, along with a Carmel attorney, were accused by the Securities & Exchange Commission of running a $15 million Ponzi scheme. Charged by the SEC are Veros Partners' Matthew Haab and Tobin J. Senefeld, and Jeffrey B. Risinger, a Carmel attorney.  The SEC ordered an asset freeze.  Here is a link to the SEC Litigation Release.

Two Veros CPAs were spotted at the convention and one was overheard saying that she had no idea what went on at the investment side of Veros; but, was she was moving on and starting her own firm.

This fraud is marketed to the Christian community and may be described as a “Christian Approach to Estate Planning.”  These fraudsters target Christians, know their audience and can quote the Bible chapter and verse.  The con appeals both to the church pastor and his non-suspecting congregation.  Millions of dollars have been lost to this scam.

Their weapon is not a gun, but a life insurance policy.

The fraudsters convince the church pastor to propose to his congregation that the members purchase life insurance policies in an irrevocable life insurance trust (ILIT) with the church being a 10% beneficiary.  This would represent their “Final Tithe.”

Insurance trusts can be excellent estate planning tools if handled by ethical financial planners and administered by a qualified trustee.
In this type of arrangement, the insurance trust is both the owner and beneficiary of the life insurance policy.  The trustee receives money from the insured, pays the policy premium and, upon the death of the insured, administers the trust for one or more beneficiaries.  In the church-sponsored plans, one of those beneficiaries is the church.
Proper ownership of life insurance is important if the insurance proceeds are to escape estate taxation.  For example, If the policy is owned by the insured, the death benefit can be subject to estate tax. One way to avoid estate taxation is to name another beneficiary as the owner of the policy.

Trust companies are poorly regulated in Indiana.  It is easy to establish a corporation with an appropriate name.  You could do it in ten minutes over the internet.  One recently established in Carmel, IN by a former insurance agent is Guardians Trustee LLC. 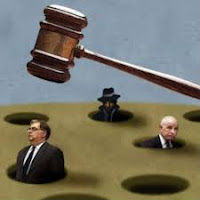 These ILIT insurance scam frequently reappears using similar names and with a similar cast of characters.  These scams have found their way from Virginia to Indiana to Texas and back again.  Some of the fraudsters lose their insurance license along the way.  That does not deter them.  Since few consumers check to if the salesperson actually has a license, they don’t feel the need to have one.  In one Hamilton County case, the fraudster stole the identity of a licensed agent and set up an agency so that he could get an insurance company to issue policies to their trust.

After the policies had been issued, they continued receiving premium checks until someone has died.  If they run out of money and cannot pay out the death benefits, they walk away and start another trust.  To improve their cash flow, the fraudsters often include in the trust agreement the “spend-thrift” provision of paying out the death benefit over 18 years.  The trust can then operate much like a Ponzi scheme.

Some of these programs have used the names of “Freedom 7 Program,” “Christian Family Net Worth,” “My Benefits America,” “Genesis Asset Management,” “Exousia  Foundation LTD” and “Stewards of Estates.”  These programs are often marketed to Pentecostal and smaller independent churches.  If you were to do an internet search (Google), you might find the same individuals associated with ILIT church programs all over the Bible Belt.

Check Them Out
Have you or an independent organization checked out your insurance agent or financial advisor?  Is he on the up and up?  Make sure you are working with a licensed professional.  Has he or she been fined by the regulators, cited for misconduct, have a string of customer complaints, or had his/her licenses suspended or revoked?  Make sure the trust company is substantial, long established, and not owned or controlled by the insurance agent.

Attend one of my free seminars that instructs seniors and others how to do this research.  The seminar is called “Is your financial advisor a crook?”

Posted by Greg Wright at 4:21 PM No comments: 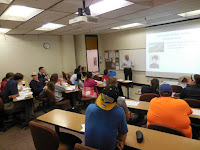 This past Monday, I was a guest lecturer at Ball State’s Graduate Accounting Capstone ACC695 class. The invitation to speak came from Dr. Mark Myring, Chairman of Ball State’s Accounting Department.