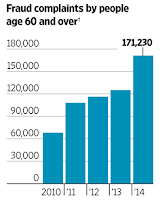 About 20% of Seniors are victims of financial fraud, and yet only 5% of the victims report the abuse.  The reasons for the low reporting include humiliation, feeling ashamed and being afraid.

According to Federal Trade Commission, the number of complaints by people age 60 and over more than doubled between 2010 and 2014.  In the face of these alarming statistics, regulators have suggested rules to help stem the epidemic.

In 2008, new rules prohibited the use a senior-specific professional designation that indicates or implies that the insurance or stockbroker had special certification or training in advising or servicing seniors.  Excluded from the regulations were Certified Financial Planners and six other designations[i], in part, because of their training and professional organization oversight.

Unfortunately, this rule has not seen enforcement, and I am unaware that anyone in violation of the rule has seen his license suspended, revoked, or has been issued a “cease & desist” order.   I’ve asked both the Indiana insurance and securities regulators.

Along comes the latest attempt this past September.  This latest proposed Model Rule has been designed to help protect vulnerable adults by requiring supervisors of stockbrokers and investment advisors to report when they have a “reasonable belief that financial exploitation of an eligible adult (age 60 or older) has been attempted or has occurred.”

It was reported here last week that Veros Partners’ accounting business was quietly sold behind closed doors to insiders by the Court Receiver, William E. Wendling, Jr.  The business was not offered for sale to other potential purchasers and a written valuation report was not provided to the Federal Judge assigned to this SEC Ponzi fraud case.

The attorney representing the accused has denied that it was a “Ponzi scheme.”  The case is complicated and will probably not be heard in court for another year.  Veros had hundreds of dental practice clients in Indiana and Ohio.  Perhaps Veros Partners had a market value of over $3 million before SEC case was filed.

It is difficult to familiarize yourself with this case and not see hints of parallels with another Midwestern accounting firm that was crippled by its association with fraud – Arthur Andersen.

You may recall that in 2002, Andersen was convicted of obstruction of justice for shredding documents related to its audit of Enron. Since the Securities and Exchange Commission cannot accept audits from convicted felons, the firm surrender its CPA licenses that year — effectively putting it out of business.   Even though the conviction was later reversed by the Supreme Court, it was too late.  The impact of the scandal combined with findings of criminal conduct ultimately destroyed the firm.

A detailed account was published in 2002 by Andersen’s home-town newspaper, the Chicago Tribune.

Several key employees at Veros Partners were previously employed by Arthur Anderson.  It does not appear that any of these individuals were involved in the Enron scandal or have any prior blemishes on their professional record.  SED lawsuit defendant Matthew Haas is an Arthur Andersen alumni,

Other Arthur Anderson alumni include some of the founders of the Veros Partners successor firms -- Trueblaze, LLC and MW Banks Consulting.  According to their LinkedIn pages and Veros Partners biographies, Adam Decker and Mylene Egenolf were employed at Andersen.

Trueblaze was created on May 27, 2015, by Adam Decker and includes former Veros employees Sarah Robinson and David Osowski.

MW Banks Consulting, LLC was formed on June 5, 2015 and appears to be operated by former Veros employees Amber Banks, Mylene Egenolf, and Wendy Day York.  Both organizations appear to have offices on the South side of Indianapolis near Greenwood.

According to court records, before its purchase of assets from Veros Partners, MW Banks had already started providing services to former Veros clients and had received payments for those client services.  Further, court records indicate that Banks, Egenolf, and York has signed non-compete agreements while Veros employees.

The bookkeeping, tax and audit business may not be as lucrative as you might first think.
According to the Chicago Tribune, Arthur Andersen embarked on a path that valued hefty consulting fees ahead of “bluntly honest bookkeeping,” and promoted a “slicker breed” of accountants who could turn modestly profitable auditing assignments into consulting gold.  Thus, the article concludes, eroding Andersen's prior good name.

Veros Partners’ defendants have not been convicted of wrongdoing.  I am certain that we will hear more from the defendants as the court date rolls around.

In 1988, after more than 80 years, the American Institute of Certified Public Accountants reversed a longstanding position by allowing accountants to sell stock, mutual funds, annuities, insurance products, limited partnerships and loan brokerage services in competition with other financial services professionals.

For many of us, CPA firms are supposed to be guardians of the public trust, functioning like the police of the financial world. They know the rules, define the right and wrong way to keep the books. If a CPA firm puts its name on a financial statement, it certifies to the public that the company is playing by the rules and that the numbers conform to a high standard.

When a CPA – any CPA -- following a review of your taxes, suggests that you invest in his “homemade” private placement or a mutual fund, you might pause and ask yourself.  Is he making a higher commission on the investment than he makes for doing my taxes?  Do I need to find a CPA to review the investment suggested by my CPA?

By the way, court-appointed Receiver, William E. Wendling, Jr. has received fees of $390,375.26.  More than the court was paid for the Veros Partners accounting business.  You may read his justification for its sale at the end of last weeks article.